Prompt #1 - Move Your Pen to the Music

Music effects people in different ways--it can be an emotional experience for some. For me, music has always been connected to my writing. Certain songs inspire images that come alive in my mind. A kernel of a story can blossom from a melody or lyrics. For short stories, I usually play a song or two on repeat that I feel has the mood of what I'm writing. Novels, I create an entire soundtrack.

I know, not everyone uses music in their writing, but I still suggest trying the following exercise. If anything, it will get you in touch with the emotion you need to infuse in your writing.

Pick two songs. One should be slow, without words--a classical song would likely be a good choice. The other should have more of an edge to it, can have words, be more fast paced--an alternative rock song, for example. If you do not own any of these styles of music, there are many options for radio stations on the internet.

First, listen to the classical song, and write. It doesn't matter what you write about. There doesn't need to be a plot or even a character. Let the sound of the music wash over you and write something that reflects how you currently feel. Keep going until the end of the song. Next, listen to the alternative rock song, and do the same thing. Allow the music to worm its way into your bones and release those emotions out onto the page.

Now, you have two starts (or maybe middles or ends) of something. Take a close look and compare the two. Did you have a different emotional reaction to each song? Your words should represent the mood you felt when listening to those songs.

If you can see a difference, then you've discovered a way to get yourself into a certain frame of mind depending on what you're writing. Even if you can't write to music, you can always listen to it right before you dive into that novel or short story to get your emotions percolating.

So, what's a chain story? A chain story is when two or more people get together and go back and forth, adding bits to a story. Each person could write one sentence, one paragraph, or even one page (or more, if people are so inclined to attempt a chain novel).

This isn't to be confused with collaboration, though. Collaborating with another writer on a story or a novel is something that takes a lot more thought and planning. Chain stories take no planning at all! They are very in the moment.

Why write something that is so unplanned and spontaneous?

First, getting together with a group of friends and seeing how a story unfolds when you have to continue from the previous person's addition is just plain fun. Heck, if you have a bunch of writers at a party, it might actually be a great game to play. Most of the chain stories I participate in tend to end up humorous--it makes the stories more fun and off the wall. Lots of laughs all around.

Second, it teaches you how to think (er...write) on your feet. You need the story to still make sense from one entry to the next, and you have no clue what the person before you is going to write until she writes it. This pressure to come up with something on the spot is even harder if you time each person's turn. If you're doing it via e-mail, you can say, allow a day between each response, even less if you're writing the story in a chat or if everyone is together in the same room!

Third, it can get the writing juices flowing. If you're having some issues with Writer's Lack of Motivation (or Writer's Block, but I don't believe in that now, nope, no such thing) writing chain stories with others could just be enough of a push to make your fingers itch to work on your own writing. Like stretching before a run--it gets the blood flowing.

Don't be shy to ask some friends to join in writing a chain story with you. You may even come away with new ideas for your current or a future work in progress.

Prompt #3 - A Picture Can Inspire A Thousand Words

I bet you've already figured out what this prompt is about from the title. It's not a new idea, by any means. I've suggested using music before for inspiration, but sometimes all you need is something visual to set you off and start a story. One picture could give you an idea for an entire novel!

So, go take a search through some art on the internet. There's a lot of it. A couple good places to start could be Deviant Art (hey, if you find something you really like, maybe you can buy it or have the artist make you a custom creation) or maybe even Pixabay (I use this one a lot to find pictures for my website and blog posts, since all art here is under public domain - free to use).

Once you stumble across an image that kind of pulls at you, that you can see the kernel of a story in, look at it for a while and brainstorm. Or maybe you don't even need to brainstorm--a wave of inspiration could strike you right when you behold a beautiful piece of art. The most important thing is to write! It doesn't even need to be accurate to the picture--the picture can simply inspire something else, like dominoes lined up. You flick one and they all fall over, one after another.

Then when you're done with however much you decide to write, take a look at the picture again and feel the connection between what you see and what you just wrote. A million pictures could inspire a million different stories, you just have to look around to see what kind of art inspires you. 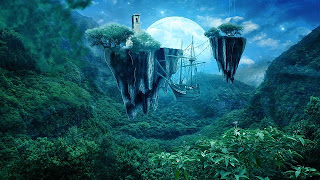 Here is a picture from Pixabay that I found inspiring. Do you? I'd love to see a snippet of writing you may come up with when looking at this picture. If you'd like to share, please post in the comments.

I'll post my own snippet below. If you don't want it to spoil your own inspiration, don't read it until you're done writing.

I'd been traveling for weeks. So many believed the vast oceans of the past to be endless, but they had nothing on the sky. Not only could you travel over water, but land as well. And most of civilization had crumbled to dust, so if you veered off course, there was no telling when you'd find a place to rest, to bolster your supplies.

And I'd done just that. Lost in a hurricane, barely escaping with my life and ship intact. Some say I should be thankful. I'd rather lose my life from a storm, though, than starvation and dehydration. Fast was always better.

Finally, I spied an island, one of the many splinters of earth that had fractured off during the Sundering. A tiny splinter. With a tiny tower. And a single old man that looked like he could have been alive for the Sundering itself.

Turning back time. Are we in a science fiction story? Nope, not quite. Though you could always convert this prompt into one if you'd like.

Almost everyone has regrets, and those regrets usually stem from decisions we've made--decisions that hindsight indicates were wrong (though hindsight isn't always right either). Confused yet? Wondering what this has to do with a writing prompt? No, sorry, I'm not delving into your psyche. This isn't a therapy session. Though, like the science fiction story, you could always make it into one. After all, writing can be quite therapeutic.

Therapy aside, delve into your memories and pick a time when you made a decision that you feel was the wrong one. Now, think about what would have happened if you chose differently. First, write down the immediate difference. Then go from there. What would your present look like if you would have done something differently in your past? Follow the dominoes as they fall, each change leading to a new one.

Or if you don't want to explore a regret in your life, pick a time you made the right decision and your life was better for it. Then consider what would have happened if you'd chosen a bad path instead. What other occurrences and decisions would that have led to?

This is a great way to explore cause and effect, which is so important in fiction. Every action has a reaction, and every choice will change the path of your character. Since you know yourself well, it's easier to map out the possible differences due to a changed decision, which you can then apply to your fiction.

In essence, writing out how much your life would have morphed due to different choices is fiction itself. With a few tweaks, you could even change it into a story in whatever genre you'd like.

In my 20s, I had a bit of an obsession with Mage Knight (if you don't know what this is, Google it). I wanted to collect all the rare figures in every set. To do this, I bought Mage Knight booster packs by the case. And I told myself I'd actually play the game as well. Of course, I never actually played, and I still have a bunch of Mage Knight figures packed away in a closet.

What if I never sunk all that money into those Mage Knight figures?

I would have saved hundreds of dollars. True, I could have just spent it on another silly obsession. But what if I'd spent it more wisely? Put it toward my student loans, perhaps. I'd have much less debt right now. Invested it for the long term--money saved for retirement (though, let's face it, I'm a writer, I'll only retire when my brain truly comes unhinged).

Or... and here comes the true fantasy. I could have spent it all on lottery tickets and hit it big! Today, I'd live in my dream re-modeled Victorian and be able to hire someone to clean my house and watch my kids while I write until my heart's content. Ah, if only.

Then a fairy would come along and steal it all.

Go on, give it a try. You don't need to be too serious. Turn back time and explore how different life might be. And write!